Metro Manila is far from what could be called a walkable city.

In less than ten minutes of walking in the EDSA-Ortigas area, for instance, one realizes just how unpleasant it is. The sidewalk is narrow, the ground is uneven, there are few covered areas, the lighting is poor, and on top of everything, the air is very polluted. When it rains, mud puddles only make things worse.

At the Ortigas CBD New Mobility Mapping Workshop on Tuesday, participants from various sectors put their heads together to come up with ideas to improve mobility around the area. With the objective of creating more efficient, cost-effective, and eco-friendly transportation for everyone in Metro Manila, the workshop gathered together representatives from the government, NGOs, big businesses, and the academe.

“This is a unique opportunity to be creative in shaping the future of our community,” said ADB Country Director Neeraj K. Jain in his welcome remarks during the workshop on March 13.

MRT passengers can hardly move when they get off at the Ortigas station. Photo courtesy of the Ateneo School of Government

Participants were first taken for a short walk around the Asian Development Bank complex, where the workshop was conducted by the Clean Air Initiative-Asia, and the Ateneo School of Government’s Innovations at the Base of the Pyramid in Asia Program. After the walk, participants revealed the existing New Mobility Grid—a map of current transportation modes, as well as points for improvement.

According to Clean Air Initiative-Asia Policy and Partnership Manager Atty. Glynda Bathan-Baterina, we should do away with the obsolete paradigm that building more roads will deal successfully with the increased demand for mobility. Instead, the workshop uses the new mobility paradigm to develop sustainable transport systems. This is done through Avoid-Shift-Improve measures, taken from a publication of the German International Cooperation, and accepted by several organizations including CAI.

The workshop was based on the University of Michigan Sustainable Mobility Accessibility Research and Transformation (SMART) Center’s approach which identifies the New Mobility Grids in communities and regions around the world.

Using color-coded stickers, participants marked maps of the Ortigas area, indicated connection points between modes of transport, areas for improvement, opportunities for business, as well as for “moving minds” in order to get key people like leaders and big organizations involved.

The long-term goal is for the workshop participants to share the idea of mapping in their own barangays, so that more and more people can get involved in working toward a pedestrian and environment-friendly city.

Project Director Dr. Segundo Romero said if a whole barangay does this exercise, it will result in action. “They will not be able to sleep because they will be thinking of so many things that they can do for their barangay, and they will know which people want to do the same thing,” he said.

Romero said that the workshop is not just one event, and they plan to put the outcomes on a big virtual map. “As they say, if you don’t pedal your bicycle, you will flounder. We are pedaling,” he said.

Tackling pedestrian safety and other problems

It was also noted that there are many redundant transport hubs, with public utility vehicles stopping before and after intersections. Participants also pointed out that a lack of predictable public transport and direct routes results in longer periods in transit, which costs time and money.

Several suggestions included a request to widen the sidewalk along ADB complex. “We have to improve sidewalks also, so people would like to walk. If that means more greenery, a covered areapara hindi ka maulanan o kaya maarawan masyado, so be it,” said Tiklop Society’s Pio Fortuno Jr., representing one workshop group.

Bike lanes were high on the list, as well as a bike sharing program to encourage people to use private vehicles less, and a carless day.

A particularly ambitious idea envisioned a green space linking Ortigas Center to the Pasig River, as well as toward Greenhills and including the Wack Wack Golf and Country Club, which was envisioned as a public park. 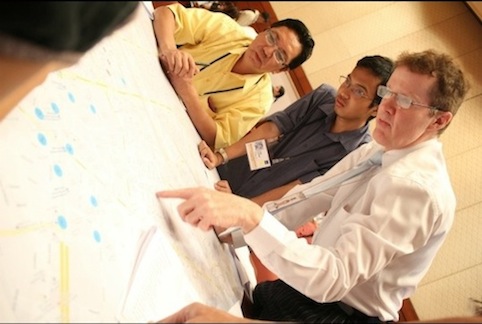 ADB’s Lloyd Wright says the city is starved for green spaces. Photo courtesy of the Ateneo School of Government

While participants were excited about their ideas, they had to remain realistic and consider the research that needs to be done, as well as possible barriers to their dream city. Current routes as well as land ownership would need to be plotted in a Geographic Information System. Experts must conduct a gap analysis to identify the overlaps in the current routes. Some of the barriers were the need for legislation, and of course, funding. The cities involved would also need to resolve conflict in their respective city plans, as Ortigas is in the middle of Mandaluyong, Quezon City and San Juan.

More importantly, the question is whether pedestrians are willing to shift to green modes of transport. Participants agreed that there is a need to raise awareness on the health benefits of walking, and make it attractive for people.

“It’s not just an activity. We’re hoping all of you will be catalysts for change in your respective cities,” said Project Manager Dr. Danielle Guillen. –KG/HS, GMA News

« Walking Still a Chore in Jakarta
D.C.’s walkable neighborhoods have a lot to offer, but at a price »