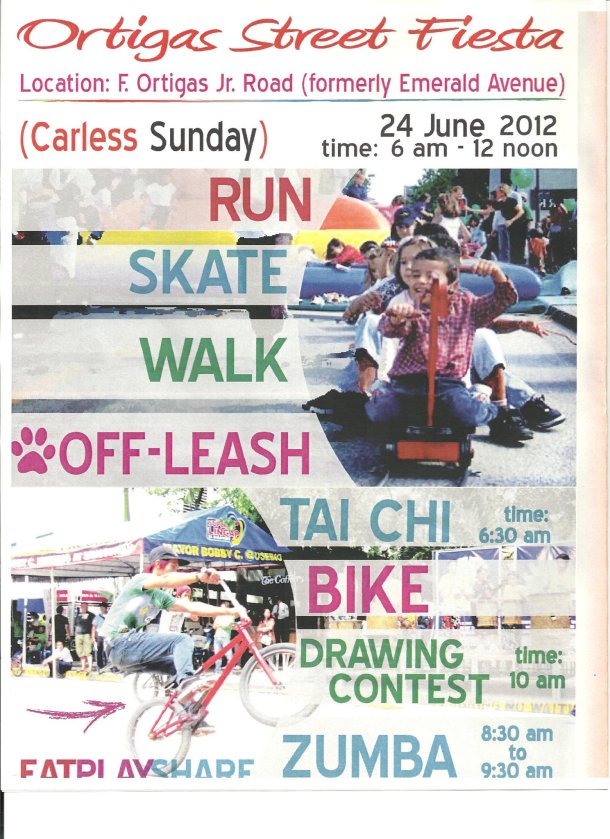 The Pasig City government launched last Sunday a local government initiative meant to promote the use of alternative non-motorized vehicles to reduce carbon emissions and encourage Pasigueños to live a healthy lifestyle.

Eusebio said starting June 3, 2012 and every Sunday thereafter, F. Ortigas Jr. Road shall be off limits to all motorized vehicles starting from 6 a.m. up to 12 noon to make way for non-motorized vehicles like bicycles, skates, skateboards and scooters.

Eusebio explained that the “Carless Day” is in accordance with Pasig City Ordinance No. 13 Series of 2011, promoting biking as a healthful and environmentally sound mode of transportation.

The local chief executive, at the same time, also distributed 100 mountain bikes under the Bike to Work Loan Program for City Employees and also led the Symbolic Inauguration of the Green Lane/Recreational lane along C. Raymundo Avenue.

Representatives from the Department of Environment and Natural Resources (DENR) Climate Change Commission and Metropolitan Manila Development Authority (MMDA), were also present during the event.