By: Katsukumi Mano and Shigeto Tanaka

To prevent car accidents and protect pedestrians, automakers are stepping up efforts to develop advanced safety vehicles (ASV) and car bodies that can cushion the impact on the human body when people are hit.

This comes on the heels of a shocking car accident in late April in Kameoka, Kyoto Prefecture, that killed two primary school children and a woman accompanying the students.

To test the progress of recent safety innovations to reduce pedestrian-related accidents, reporters test-drove a Fuji Heavy Industries Ltd.’s car equipped with the Eye Sight system at a parking lot in Mitaka, Tokyo, this May 2012.

When the car kept moving forward, a slight brake was automatically applied. A second later, a strong brake was applied, and the car stopped about 50 centimeters in front of the cushion.As the car moved toward a large cushion at a speed of 20 kph, a loud alarm went off.

According to the firm, the Eye Sight system recognizes pedestrians and other objects in front of the car with a camera installed inside and applies the brakes when the car approaches the object too closely. 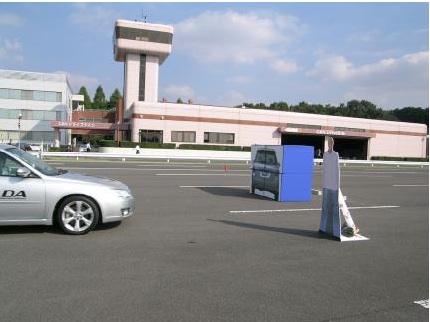 Obstacles resembling a pedestrian and vehicle were placed on the road to evaluate whether the camera correctly recognizes them and whether the Pre-crash Safety System operates properly.

The automaker started introducing the system in some models in 2008. The system’s upgraded version released in 2010 helps cars stop before crashing when the difference between the speed of the car and the object is 30 kph or less, according to the firm’s spokesman.

Fuji Heavy Industries is the only domestic automaker that has developed such a technology to stop cars before a collision.

The braking technology to reduce damage from a collision was developed as part of the project to promote ASV, which was initiated by the former Transport Ministry in 1991.

The project, which aims to develop “cars that don’t cause accidents,” has resulted in about 30 technologies that are already in use, including equipment to sound an alarm when a car swerves due to drowsy driving.

While the braking technology is designed to prevent collisions with pedestrians, efforts have also been made to develop car bodies designed to reduce the damage to humans should an accident occur.

In a large percentage of fatal car accidents, pedestrians died as a result of hitting their heads against the engine through the hood. Therefore, automakers are trying to reduce the risk of fatality by raising the shock absorbency in hoods and widening the space between the engine and the hood.

The Land, Infrastructure, Transport and Tourism Ministry established in 2004 a guideline to protect pedestrians’ heads, which stipulates two-thirds of a car’s hood should have a structure to prevent pedestrians from suffering from skull fractures or concussion. 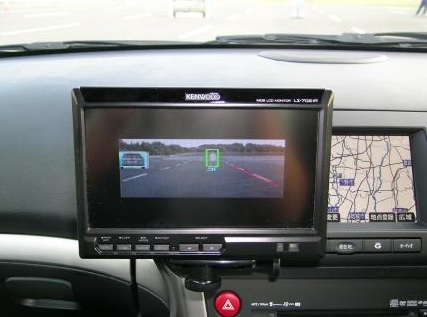 The camera recognizes a pedestrian (center) and a vehicle (left).

The ministry guideline prompted automakers to develop new technologies, which spawned a technology designed to prevent pedestrians from hitting their heads against the engine by flipping up the hood from the windshield side upon impact.

To further encourage advancements in technology by automakers, the ministry last year revised the head protection guideline and established a new measure regarding leg protection.

However, there is a limit to automakers’ efforts.

“Automatic brake systems may not work when people jump in front of cars, and the sensor’s detecting ability declines in bad weather,” a ministry official said.

Automaker officials also said their technologies are primarily designed to support drivers, so almost nothing can be done when a car rams into a pedestrian at full speed.

Currently, luxury cars are the main ones equipped with the braking system for reducing crash damage. In some cases, car owners may be asked to pay several hundreds of thousands of yen to install the system. In the case of light vehicles, such as passenger cars, very few models have introduced the braking system.

Of 3.9 million new cars produced in 2010, only about 37,000 cars, or less than 1 per cent, were equipped with the braking system, according to the transport ministry.

Finally, designing car bodies to reduce potential injury to people is not a perfect process.

“Situations in car accidents vary greatly, such as which part of the car a pedestrian is hit by or how tall a person is. We can’t assure [the design] works all the time,” an official of a carmaker said.

from: Tech News –  Straight from Asia