Singapore’s Civic District to turn into a pedestrian haven 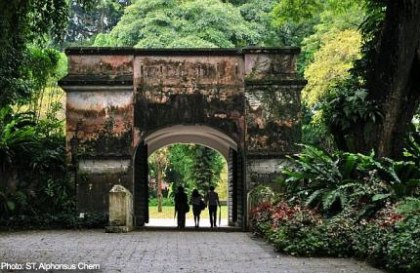 THERE seem to be three main issues facing visitors when they attempt to walk around the Civic District.

Signage is not obvious, routes between attractions do not stand out or connect well, and the walking experience itself leaves much to be desired.

To revitalise the area, the Government has budgeted $50 million to make it more pedestrian-friendly.

It is prepared to close roads, cut trees and make open spaces possible venues for outdoor arts and cultural events.

This bid to strengthen the area’s identity as an arts and cultural hub is slated to be done by 2015, to coincide with the opening of the National Art Gallery as well as Singapore’s 50th year of independence.

The move is a timely one, said urban planning experts and tourists The Straits Times spoke to on Friday.

Many of the sidewalks in the area are open to the elements in Singapore’s hot tropical weather, they noted.

Visitors also have difficulty navigating between the main clusters of attractions – from Fort Canning to Chijmes and City Hall, to the Asian Civilisations Museum, Empress Place and Esplanade Park.

Hong Kong tourist Helen Ng, 30, was trying to make her way from Fort Canning Park to the National Museum. She almost took the long route going down Canning Link instead of a pedestrian bridge from the park.

She said: “It is not obvious on the map that there is actually a bridge to the back of the National Museum. I might have taken a longer way down to the main door of the museum if I didn’t see the bridge.”

Similarly, there is a little-known passageway that is a short cut from the park to the back of the Peranakan Museum and The Substation. The roundabout way via Armenian Street is likely to take five to 10 minutes more.

Other tourists wished there were more amenities and food options at Esplanade Park, along Marina Bay.

“I came here because of the good view of the iconic attractions but it is very hot here and there are no food and drink stores,” said Ms Liu En, 29, from Beijing.

The deadline for the tender is Jan 31, but experts already have views on how the area’s connectivity can be improved.

Singapore Institute of Architects president Theodore Chan, who works in the area, said many joggers use the route along the Singapore River Promenade in the evenings, but are hard-pressed to find shelter when the weather turns sour.

“Instead of sheltered walkways which would mar the landscape, there could be stop pavilions that are quaintly done – these would serve as rest points – as well as signposts to define the boundaries of the district,” he said.

He added that more seating benches could be set up, as some of the pavements, like those in front of High Street Centre, are bare.

Heritage buff Daniel Teo believes the area could also do with better landscaping – in the form of coloured footpaths and more shrubs planted along them to soften the edges.

“Not only will this make it easier for visitors to chart out where they want to go, it could also be done in a way that would make the incline less steep for certain areas, which could pose a problem for the elderly,” said the property developer and architect, whose love for conservation prompted him to voluntarily conserve an aged building at the corner of Armenian Street.

Mr Teo also believes that some of the streets can be pedestrianised, should there be a purpose for it.

Indeed, the URA has said as much, in a tender released on Thursday. However, the agency added that closing St Andrew’s Road, Connaught Drive and Fullerton Road was not possible for now, due to Singapore’s hosting of the F1 Grand Prix race.

Recalling a recent road closure at Armenian Street for a festival, Mr Teo exclaimed: “The atmosphere was wonderful!”

Initiatives to mitigate the effects of the hot climate will also help, said Mr William Lau, president of the Singapore Institute of Planners.

“Heat and humidity can make it difficult for pedestrians to go outdoors. So we need to control that innovatively,” he said, citing the canopy above the bars and clubs in Clarke Quay just across the river as an example.

“Of course that would not work in the Civic District with its stately buildings, but solving that is the million-dollar question,” he said.

In order to attract more people and activities to the area, Mr Lau said that one way could be to have more food kiosks.

“Another low-hanging fruit in making an area more attractive is changing the streetscape. This means upgrading the material of the floors and improving the lighting and signage,” he said.

The full pedestrian route, said Surbana Urban Planning Group managing director Jeffrey Ho, will have trees for shade, and nodes of interests peppered throughout the district.

“It should be safe, friendly and tastefully designed with picturesque settings for photo opportunities and orientation. On the whole, it should carry flavours of our culture and a tremendous sense of affinity with island living,” he said.

Real estate veteran Pua Seck Guan agrees that there is a need to make the walking routes interesting. This includes coming up with better materials to showcase the area’s history and more comprehensive walking tours.

The executive chairman of Perennial Real Estate, which is redeveloping the old Capitol site, said: “Tourists want to see what they can’t back home. For too long, we’ve undersold our history and culture. It’s time to make it more attractive.”