The Eco Cabs project of Punjab’s Fazilka town, which revolutionized non-motorised transport by helping commuters hail a rickshaw with a phone call, has now launched a Rapid Rickshaw Transit in Chandigarh and is planning an entry into New Delhi

In June 2008, the Fazilka town in India’s north-western state of Punjab began an experiment with its rickety local transport system by adding cycle rickshaws that a person could hail by dialling a phone number. Eco Cabs, as the ‘Dial a Rickshaw’ project was called, went on to transform the way people travelled in the town with a population of 67,000. Within three years, Eco Cabs won the Indian government’s Rs 500,000-award for the Best Urban Non-Motorised Transport model in the country.  In the last five years, the popularity of Eco Cabs has influenced as many as 22 towns in Punjab to replicate the Fazilka experiment with considerable success. Last month, Eco Cabs launched the service in the Union Territory of Chandigarh. Christened ‘Rapid Rickshaw Transit’, the facility will be available to the residents of 30 of Chandigarh’s 56 sectors to begin with. Eco Cabs, which made the air of Punjab cleaner by drawing people out of their cars, will now try to repeat its success in Chandigarh, the most well planned city in India. Along with the dial service, ‘Rapid Rickshaw Transit’ has also added a mobile application to help commuters get a rickshaw faster and easier. When Eco Cabs was first launched in Fazilka, its private owners realized that they needed to do something different to draw the attention of the commuters to the rickshaws, a traditional mode of transport in many Indian towns. “We were trying to improvise all the three elements, namely rickshaw, driver and society,” says Mr Navdeep Asija, the founder of Eco Cabs. “It also meant jobs to the poorer sections of the society, digital empowerment and saving the environment,” he adds.

A real time infrastructure was soon put in place by handing over cheap mobile phones to the town’s residents on a permanent basis and creating a call centre to facilitate them hail a rickshaw by making a phone call. The quality of the rickshaw was initially improved by reducing its weight from 90kg to 65kg. Another measure was adding more luggage space. Later, the floor space was also reduced from two feet to 30 cm to help the commuters, mostly the elderly and women. For the rickshaw drivers, Eco Cabs became a welfare measure, helping them work and earn and be part of an organized transport system with a cause, in this case, to save the environment from the pollutants spewed by motor vehicles. In that respect, the members of the society became the biggest partners of the Eco Cabs project, by shunning their cars for errands in the town whenever they could.

“We divided the town into nine zones and put 50 rickshaws each there. We bought mobile phones at wholesale prices of Rs 1,040 and supplied them to residents who contributed half of its price. They could call a rickshaw by just dialling the call centre number,” says Mr Asija, who also put in place an 11-member management committee, comprising senior rickshaw drivers, to ensure discipline among the crew. As many as 9,000 calls are received everyday at the call centres in each zone of the town, which also has built permanent rickshaw stands with the help of the local government. In the winter months, the rickshaw drivers sport a hoodie and cap, something supplied by the town’s residents.

In Punjab, there are 260,000 cars and 300,000 rickshaws. While the daily occupancy rate for cars is 1.1, as many as 20 people travel on each rickshaw every day.  It means rickshaws ferry 6 million people daily as compared to only 350,000 to 400,000 by cars. In just five years, Fazilka’s Eco Cabs have very much become a part of the town’s transport system. “For my father, who is 75-year-old and can’t walk to the rickshaw stand, calling a rickshaw by phone is of a lot of help. Similarly, when my daughter’s school van doesn’t come, we call a rickshaw,” says Mr Rajneesh Kamra, a resident of Fazilka.

In 2011, when Eco Cabs received the national award for the Best Urban Non-Motorised Transport model, its management immediately ploughed the prize money back into the system, buying more new rickshaws and opening facilities for research and development into the vehicle. Today, its engineers are working on developing a solar-powered rickshaw, which is in the prototype stage. 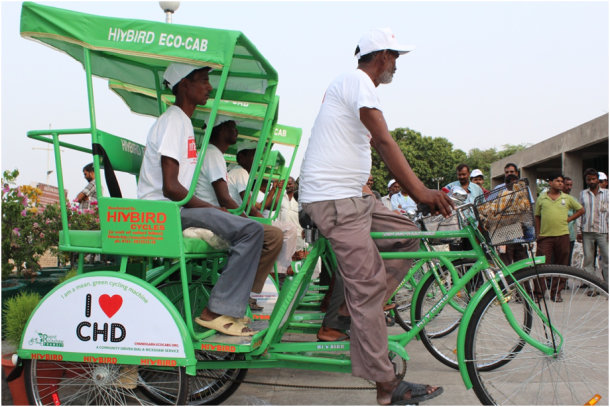 In Chandigarh, where the Rapid Rickshaw Transit was inaugurated on August 23, 2013, no mobile phones will be handed out to commuters. Instead, a mobile application has been developed to help them call a rickshaw. “Ninety per cent of the residents have a mobile phone in Chandigarh. Therefore, we decided not to supply handsets,” says Mr Asija. The Android-based mobile app helps a commuter locate a rickshaw in the vicinity. There are 169 rickshaw stands already built in 47 sectors of Chandigarh by the government while the stands are yet to be constructed in the remaining nine sectors. Initially, 250 vehicles in 30 sectors will be serving commuters under the ‘dial a rickshaw’ project in Chandigarh. “Everyday we are adding another sector to the project,” says Mr Asija. The rickshaw drivers have been recruited under crowd sourcing after city residents referred drivers to Eco Cabs through the social media. “The new rickshaw service has added a flavour to the city. We can call on the phone and ask a rickshaw to pick us up,” says Ms Irfa Mufti, a journalist in Chandigarh. “There are seat belts, space to rest your legs, space for luggage and even a radio. There is also a children’s seat behind. If you need bottled water, it is also available for a fee. You can travel in the rickshaw while reading a newspaper. I am enjoying my journeys using a non-motorised transport,” adds Ms Mufti.

Delhi, the Next Destination

Eco Cabs have identified New Delhi as the next destination for launching the scheme. To begin with, it has tied up with the Indian Youth for Climate Network and Wiser India, both NGOs working in providing sustainable solutions for development, to start the project in Greater Kailash. The scheme will be introduced in the gated Hemkunt Colony where 10 rickshaws will be parked outside its entrance. The colony residents will be able to dial a rickshaw using the colony intercom connecting the reception at the entry gate. The personnel at the entry gate will direct the rickshaws to the commuters. There are 90 houses in Hemkunt Colony. “We are yet to name the service in Delhi. We may call it Delhi Eco Cabs or Hemkunt Express,” says Mr Asija.

Judicial Intervention in Favour of NMT

It was an order of the Punjab and Haryana High Court that led to the spread of Eco Cabs in 22 towns in Punjab. In its order in April 2010 while taking suo moto cognizance of a newspaper report that highlighted the sustainable mode of transport under Eco Cabs operating in Fazilka, the High Court asked the Punjab government to replicate the scheme in other towns in the state as well as Haryana and Chandigarh. The scheme thus extended to 22 more towns, with the help of Eco Cabs, local NGOs, rickshaw drivers’ unions and local administrations. However, introduction was delayed in Chandigarh for two years before the Rapid Rickshaw Transit was launched in August 2013.

« X Crossings: Will India ever see them?
Sydney bike lanes part of plan to open up light rail corridor »