Chennai: Old area of city to get promenade

For pedestrians in the city, there’s finally some good news. Mylapore, one of the oldest and most crowded of localities, is set to become semi-pedestrian.

At the first public consultation on the issue held on Monday by the Chennai Corporation, a chunk of Mylapore residents and other stakeholders supported the proposal to limit the number of vehicles in the area, and to create a promenade for a heritage walk on Luz Church Road.

The promenade, which will be the first of its kind in the city, will connect Luz Church, the church in Santhome and the Kapaleeshwarar Temple tank. This is meant to give both residents and tourists the opportunity to view and explore these heritage structures while taking a leisurely stroll. 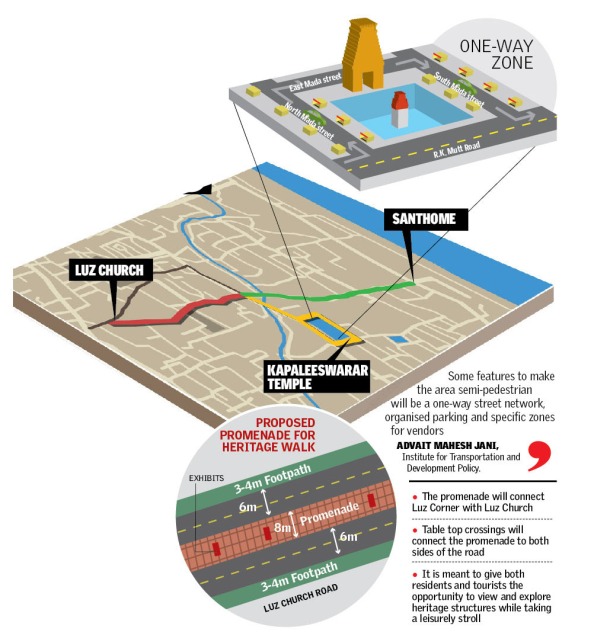 As per the proposal, the promenade will be eight metres wide in the middle of Luz Church Road. There will be a six-metre carriageway for vehicles on either side and three-metre wide footpaths beyond them to ensure the area remains semi-pedestrian. Table top crossings will connect the promenade to both sides of the road.

“Other features to make the area semi-pedestrian will be a one-way street network, organised parking and specific zones for vendors,” said Advait Mahesh Jani, Chennai programme coordinator, Institute for Transportation and Development Policy.

Despite being welcomed by many, the proposal is bound to affect a number of residents on the first floor of buildings on North Mada Street, East Mada Street, South Mada Street and R.K. Mutt Road. Once the area is semi-pedestrianised, one-ways will be the norm and parking space will be limited.

At present, there is enough space for 700 cars to park on these stretches. However, the proposal aims to reduce this by 15 per cent. An alternative parking facility for 300 cars will be created inside the Mylapore MRTS Station.

Moorthy, a retail vendor in the area said most ground-floor houses had already been converted into commercial outlets and parking was already a huge problem. Noor Mohammad, another vendor, said that everyday traffic jams were caused because of vehicles of big commercial outlets.

Access from Luz to the Kapaleeshwarar Temple Tank and to Santhome however, will be easier once this is done.

This apart, Corporation officials said there are also plans for a pedestrian plaza in Pondy Bazaar.