Home › News › Reclaiming the streets: a vision of a happier, healthier Mumbai

Reclaiming the streets: a vision of a happier, healthier Mumbai

For tens of thousands, it is a vision of a better, happier and healthier city. If on a week day, pedestrians can barely navigate this traffic-congested, hawker-infested, heavily polluted stretch in Mumbai’s swank suburb of Bandra, for the last three Sunday mornings these few kilometres of Linking Road have become a road of their own.

India’s commercial capital is one of the most crowded cities in Asia, where pedestrians lose out to cars every time. But now, through a new community initiative that aims to reclaim public spaces in Mumbai swallowed by motorists, hawkers and illegal encroachments, no cars are allowed on one 6.5-kilometre stretch just to the north of the old centre of the city between 7 and 11 am on Sundays.

Instead of snarling traffic, there are local people with their bicycles, skateboards, yoga mats and footballs. Children make chalk drawings on the roads, senior citizens settle for a comfortable round of carrom, a local board game, while a folk singer has housewives clapping along to a energising beat.

The initiative is part of the Equal Streets movement, promoted by a group of 15 non-government organisations. It aims to focus government attention on the lack of footpaths, increasing priority given to motorised traffic and resultant road rage, accidents and pollution. So far, the authorities have been supportive. A force of 500 policemen ensured that the cleared stretch stays car free, helps divert traffic and even guides visitors to the various activities that make for the carnival like atmosphere.

One newcomer last week was teenager Sakshi Jethwa, who had travelled more than 10 kilometres on Sunday to rent a bicycle and ride around Linking Road with her friends.

“I have never been able to cycle so freely all my life, taking breaks whenever I like and without worrying about cars speeding next to me,” she said.

The new Equal Streets initiative was inspired by a project in Bogotá, Colombia where a similar experiment has rapidly resulted in better public transport, cycling and walking infrastructure and dedicated walking grids.

“Colombian cities like Bogotá, Cali and Medellin have shown the way where major arteries are thrown open to people every Sunday [morning]. It is for this very reason that this movement is known as Ciclovía, Spanish for “cycleway”, which, for a change, prioritises this modest mode of transport,” says the Equal Streets vision statement.

The initiative helped transform the negative global perception of Bogotá from drug-wars and crime to that of a world leader in the field of sustainable transport, experts say.

Embarq India, one of the main forces behind the venture, has already pioneered a similar project in Gurgaon, a satellite city of New Delhi, the Indian capital. The project, launched a year ago, has resulted in permanent infrastructure being built, including cycle lanes and walking tracks. More than 30,000 citizens turn up every Sunday to take over an 11 kilometre stretch of road.

The idea is catching. The experiment has already been tried in other Indian cities including Ahmedabad, Bhopal and Navi Mumbai, and will soon be trialled in Bangalore, Hyderabad and Pune.

“The culture of pedestrianisation has always existed in [Mumbai],” said Binoy Mascarenhas, Embarq India’s manager for urban transport. “It’s always been an invisible mode of transport, we just need to bring it back to the mainstream from the backburner,” he said.

Krishnaraj Rao, a lawyer and activist, initiated a programme with slum children a decade ago, painting lines on the roads to mark where pedestrians could walk in safety.

“Motorists, even when they were inconvenienced, appreciated the effort,” he says. “Everyone knows that the pedestrians, particularly senior citizens, are an ignored lot.”

But even if in Mumbai, a city of 20 million crammed into a narrow peninsula, the logistics of the challenge are most daunting, Equal Streets, with several like-minded organisations, has big goals.

“We will scale it up to Oshiwara (a northern suburb), making it a total of 30 kilometres of cycling space, after the first eight weeks in Bandra-Khar-Santa Cruz,” says Renuka Tahliani, one of the founders of the KBS Foundation, which initiated the first car-free Sunday initiatives.

The movement also aims to democratise the use of roads – bicycles are provided free for use on Sunday mornings, and running programmes are held for children from under-privileged backgrounds – the segment which has suffered most from the rise of motorised traffic. One of the movement’s objectives is also to wean the city’s children from indoor video games to the free outdoors.Widening lanes for cars and making way for new housing has meant that footpaths in Mumbai have been shrinking every year. New business districts in the city in fact have no footpaths factored into their planning at all. The only official cycling track at the Bandra Kurla complex, the new commercial hub of Mumbai, is in a state of disrepair.

“Even the sea link [a 5.6km elevated highway over the sea] could have been planned … with cycling tracks and a pedestrian track, but the planners only focus on making things better for motorised traffic,” said Tahliani.

Urban planners say Mumbai can be turned into a pedestrian friendly city – and that pedestrianisation can be cost-effective compared with other transport projects. Simple measures like re-programming signals or increasing the duration of red lights can also go a long way in improving conditions for pedestrians.

Footpaths, on the other hand, face a design problem, being barely a metre wide, and heavily obstructed. Trees on pavements have been the other big losers in the fight for space on Mumbai’s roads.

“The city loses nearly 20 trees on an average every day. Nearly 1,000 trees fell in June and July in this year’s rains”, said PK Das, a leading city architect involved in the Equal Streets initiative.

“Cities cannot be planned to merely have large landscapes or gardens and parks, “ he said. “What matters most is a series of small initiatives intertwined with their neighbourhoods and well-connected with other such spaces in adjoining areas for easy accessibility and engagement.”

Barring a few designated parks for senior citizens and municipal playgrounds for children, the city has very little to offer by way of undesignated free space where citizens can just spend time away from congested housing. An average home in Mumbai has just 500 square feet of surface area.

Tahliani says the Equal Streets idea is to eventually make Linking Road a one-way four-lane road, with one lane earmarked for cycling, along with one-metre-wide pavement with street furniture and tree cover. While that idea might take a while to be realised, children like Prisha and Khushi, who have painted their names on the road next to a chalk drawn game of hopscotch, are happy to claim their piece of road paradise till noon, when the roaring traffic will wipe away all traces of an idyllic morning. 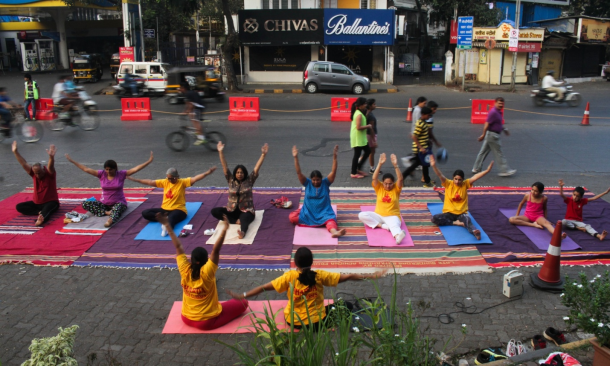