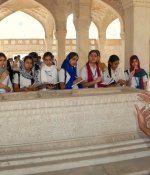 A simple walk in Delhi can be a big contributor to cultural pluralism. The three-year-old heritage walk in the famous Nizamuddin area in India’s capital of New Delhi achieves just that. In the second part of our new India Heritage Walk City Series, we find out how walking through a bylane can bring people and… Read More ›

Demanding Urban Road Space as a Human Right in the Philippines

On 17 June 2014, an event featuring an unique theme was hosted by the Asian Development Bank (ADB) Head quarters in Manila. Antonio Oposa, Jr., an attorney and a leading voice of Non Motorized Transport (NMT) users was present to highlight the principles espoused by the Road Sharing Movement, a citizen-led petition demanding for shared… Read More ›

A right to walk campaigner in India’s Andhra Pradesh state is fighting the elections to change the political agenda in favour of non-motorised transport Indian democracy’s most vivid symbol – the elections – will have a shade of NMT flavour this year. A campaigner for the right to walk has joined the fray in the… Read More ›