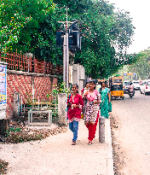 In the bustling capital of the Southern Indian state of Tamil Nadu, the city corporation has launched a new street design project to protect pedestrians and cyclists, helping them reclaim space lost to cars After stories of residents reclaiming streets in Indian cities like Gurgaon, Bangalore and New Delhi for walking and cycling, and even… Read More ›

MYBYK along the BRTS makes in roads into cycling in Ahmedabad The inspiration A young chartered accountant was pursuing his dreams in metro Mumbai when a groundbreaking idea changed his profession and fixed mindset. Travelling in public transport was an everyday challenge Arjit Soni faced as he found the trains and buses overcrowded and time… Read More ›

Popularly known as the ‘City of Joy’, Kolkata is one of the greatest cities in the East with a confluence of cultures spanning centuries. However, with a combined population of over 14 million in the city and its suburbs, Kolkata has often been vilified for chaos, congestion and also pollution. In the midst of all… Read More ›